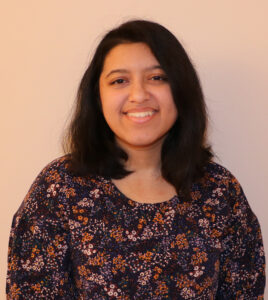 The Society of Toxicology (SOT) is pleased to announce that Tanvi Banota, Rutgers, The State University of New Jersey, New Brunswick, NJ, has been awarded the 2021 SOT Undergraduate Research Award. This prestigious award is conferred to outstanding pre-baccalaureate students whose research abstracts have been accepted for presentation at the SOT Annual Meeting. This award is given based on the quality of the submitted poster abstract, personal statement, academic record, and the advisor’s supporting recommendation.

Ms. Banota will present her research findings on the “Farnesoid X Receptor Regulates Immune Cell Activation and Recruitment to the Lung Following Exposure of Mice to Nitrogen Mustard” to attendees from around the world during the Virtual 2021 Annual Meeting and ToxExpo, which is March 12–26, 2021. The SOT Annual Meeting is the largest toxicology conference and exposition in the world.

This research was conducted at the Rutger University under the mentorship of Dr. Debra Laskin. Ms. Banota is one of 11 SOT Undergraduate Research Award recipients who will be formally honored with the other 2021 SOT Award recipients and new Honorary members at the Awards and Recognition event scheduled at 10:00 am ET on March 25. The award recipients are grouped with mentors and participate in a number of sessions designed to introduce undergraduates to the discipline of toxicology, graduate school, and career options, as well as attending other meeting sessions. Since its inception, SOT has been committed to fostering the development of the next generation of scientists.

“This year—more than any year in the immediate past—has illustrated the importance of scientists working to advance public health. The SOT Award recipients represent those at the forefront of basic, translational, and cutting-edge research aimed at benefiting public health, says George P. Daston, PhD, 2020–2021 SOT President. “The SOT Awards also honor individuals who are training the next generation of scientists and the field’s most promising postdoctoral and student researchers.”

About SOT Awards and Honors

The Society of Toxicology (SOT) Awards program recognizes distinguished toxicologists and students each year based on merit. In 1962, the Society inducted its first honorary members, establishing its honors program. In 1965, the SOT Awards program was created with the establishment of two awards, the SOT Merit Award and the SOT Achievement Award, to support “the furtherance of the science of toxicology.” In 2021, the Society presents more than 20 awards that recognize achievements of senior and early career scientists and further toxicological research. Hashtags: #SOTAwards, #2021SOT

Founded in 1961, the Society of Toxicology (SOT) is a professional and scholarly organization of more than 8,000 scientists from academic institutions, government, and industry representing the great variety of individuals who practice toxicology. SOT is committed to creating a safer and healthier world by advancing the science and increasing the impact of toxicology. The Society promotes the acquisition and utilization of knowledge in toxicology, aids in the protection of public health, and has a strong commitment to education in toxicology and to the recruitment of students and new members into the profession. SOT values diversity, equity, and inclusiveness in all their forms and promotes them as part of all Society activities. For more information about SOT, visit the Society’s website or like/follow SOT on Facebook, Instagram, LinkedIn, and Twitter.